Blackberry has release a new update for BBM app for Android and iOS that will fix some bugs as well as some new features for the Blackberry Messenger client for both platforms. Additionally, the iOS version of BBM app will support both iPad and iPod touch.

While the Android version gets support for BBM contact categories, as well as improved group list sorting and filtering, the iOS version now comes with better support for right-to-left languages. Both versions also bring bug fixes and new options for sharing your BBM PIN Barcodes in all linked social medias. 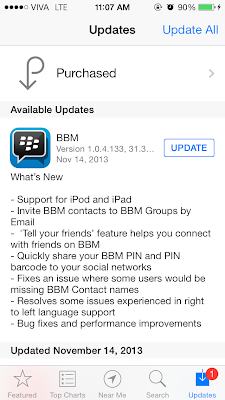 Posted by ilulz at 12:27 PM
Email ThisBlogThis!Share to TwitterShare to FacebookShare to Pinterest