Versace Not Impressed By Versace Movie 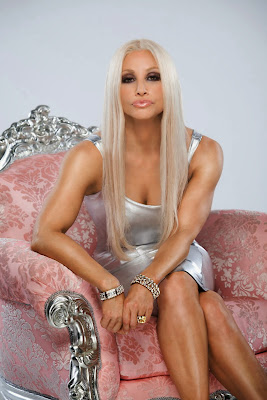 Donatella Versace is not a fan of the new made-for-television film "House of Versace," commissioned by American network Lifetime. The movie - which stars Gina Gershon, who played a Donatella-inspired character called Fabia in Ugly Betty - is set to air this Sunday.

"Versace has neither authorised nor had any involvement whatsoever in the forthcoming TV movie about Mrs. Versace, "the company said.

The movie is based on a book by Deborah Ball, House of Versace: The Untold Story of Genius, Murder and Survival, published in 2010 - which was also created without Versace's approval.

"Since Versace did not authorise the book on which it is based, the movie should only be seen as a work of fiction," a spokesperson for Versae told WWD. The book focuses on Donatella's quest to maintain the house of Versace following the murder of her brother Gianni - who will be played by Enrico Colantoni - in 1997.

Posted by ilulz at 8:30 PM
Email ThisBlogThis!Share to TwitterShare to FacebookShare to Pinterest