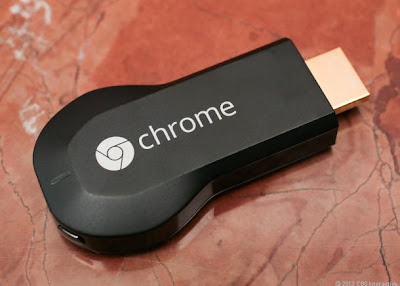 Google is doing a good job trying to promote their Chromecast device! I am sure you have all heard about this amazing USB, small in size, yet big in action.

iOS users now can set up and manage their Google Chromecast devices with an app Google released Tuesday. Google announced the app on its Chrome updates blog and published the app on iTunes. The app can be used to set up a Chromecast's Wi-Fi settings and to adjust settings such as the device's name. Chromecast devices plug into a TV's HDMI port so that people can send video streams from teir PCs to the TV using an Andriod or iOS device as a remote control.

I think I am going to add this on my "to buy" list!

Posted by ilulz at 8:43 PM
Email ThisBlogThis!Share to TwitterShare to FacebookShare to Pinterest