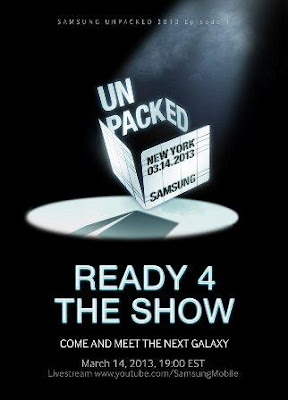 The release date of Samsung Galaxy S4 was confirmed by the company's vice president, JK Shin. Just like my previous post stated, the new flagship smartphone will be introduced in NY on March 14. Yesterday "Samsung Mobile" posted a video teaser for the coming Galaxy S4 on their Youtube channel. The title of this video is [Samsung UNPACKED] Be ready 4 the next Galaxy.

When I first saw that video I actually didn't like it, but after I've watched it again I got the idea "probably because I didn't had my coffee first". However, I have few comments to share on this campaign / idea:

1.       I love the title of the video it is very creative, why?
·         They have mentioned the "UNPACKED" word, which means they are teasing the audience and pulling their legs. This way they will make sure that the customers/ audience will keep an eye on their launching event and be a part of it.
·         They have used the number 4, which represents Galaxy S4.
·         They were sending a message through this video, more like a reminder to the audience to be ready for their big event being held on March 14, 2013.

2.       They might have actually used Galaxy S4 in this video "when the man was making a call in his office," but this is not confirmed yet.

3.       I truly believe that Samsung could do better than this, but it's not a bad idea after all.

Unlike Galaxy S3, I like how Samsung is promoting for their new Galaxy S4 this time. Let’s hope that the features are worth waiting and dazzling :-D

You can watch the video teaser below.

Posted by ilulz at 11:03 AM
Email ThisBlogThis!Share to TwitterShare to FacebookShare to Pinterest