The echoes of a Royal wedding from an earlier era are difficult to ignore.
The backdrop is the same: the opulent red-and-gold decor of the grand Throne Room at Buckingham Palace. And the mischievous smiles on the faces of some of the bridesmaids and page boys – and endearingly bewildered expressions on the others – are strikingly similar.
But, 30 years after the wedding of Prince Charles and Lady Diana Spencer, the official wedding picture of Prince William and Kate Middleton also reflects the differences between the two couples' relationships. 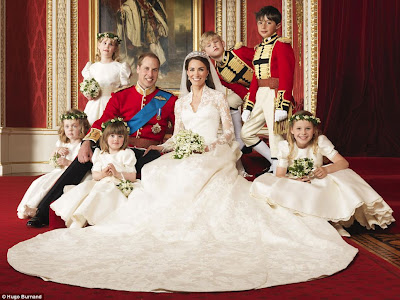 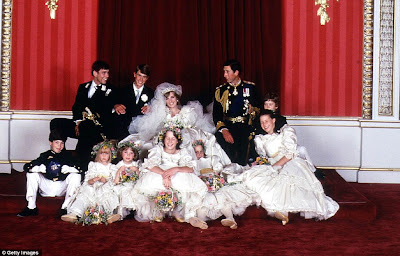 
The photograph of Charles and Diana, taken by Patrick Lichfield, seemed to capture a moment of spontaneous informality, with the wedding party collapsing in a fit of giggles. But, as we now know, the warmth was not reflected in the marriage itself.
By contrast, Kate and William's picture, by photographer Hugo Burnand, appears more formal, despite little Tom Pettifer's insistence on leaning in as close to the bride as possible.

Posted by LuLu R. at 12:29 AM
Email ThisBlogThis!Share to TwitterShare to FacebookShare to Pinterest